At the invitation of His Excellency General the Honourable Sir Peter Cosgrove AK MC (Retd), Governor-General of the Commonwealth of Australia, His Majesty King Willem-Alexander and Her Majesty Queen Máxima will pay a state visit to Australia from Monday 31 October to Friday 4 November. The King and Queen will be accompanied by foreign minister Bert Koenders. They will visit Perth, Canberra, Sydney and Brisbane. Following their visit to Australia the King and Queen will pay a state visit to New Zealand from 7 to 9 November. Foreign trade minister Lilianne Ploumen and economic affairs minister Henk Kamp will head a parallel trade mission to the two countries. 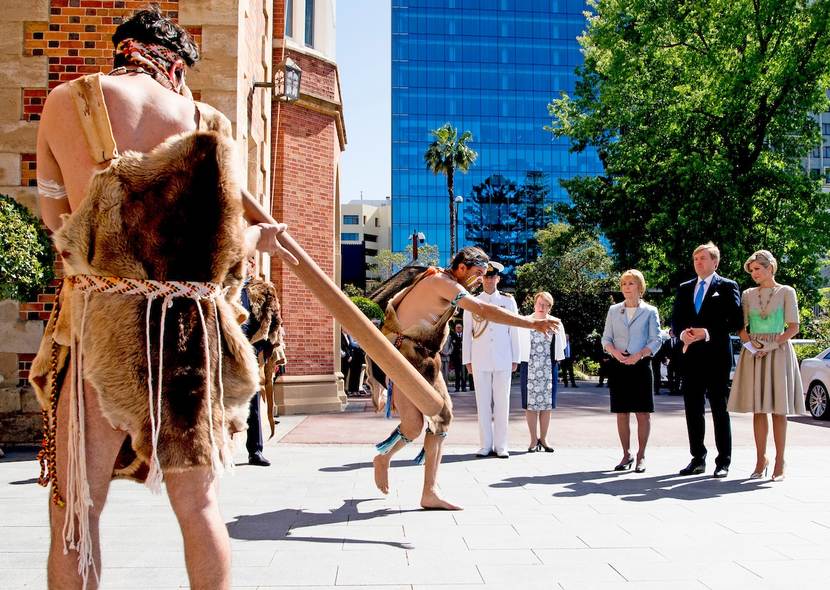 The King and Queen are welcomed to Australia in a traditional manner with an Aboriginal smoking ceremony.

The state visit to Australia will focus on confirming and expanding the Netherlands' long-standing and wide-ranging bilateral ties with Australia. The two countries' shared history stretches back to the early 17th century. In 1606 Willem Janszoon, a trader with the Dutch East India Company (VOC), was the first European to set foot on Australian soil. Ten years later Dirk Hartog and the VOC ship the Eendracht dropped anchor off Australia's west coast; a year-long celebration in 2016 is marking the 400th anniversary of this event. Apart from commemorating VOC history, the state visit will also focus on Australians of Dutch decent. Between 1947 and 1971 around 160,000 Dutch people emigrated to Australia. Receptions for the Dutch community will be held in three cities.

The visit will also draw attention to the military and academic partnerships between both countries and the flooding which Australia, and Brisbane in particular, has been contending with.

The trade mission will focus on innovative and sustainable solutions to societal challenges. These challenges lie principally in the following sectors: horticulture & propagation materials, agri-food, smart cities & smart logistics, sports, healthcare and water. More than 90 businesses will participate in the mission.

The state visit will begin at Government House, where the King and Queen will be welcomed to Australia in a traditional manner with an Aboriginal smoking ceremony. They will then meet with Her Excellency the Honourable Kerry Sanderson AC, Governor of Western Australia. Following this the King and Queen will leave for Fremantle port where they will walk along the Welcome Walls. Engraved in these walls are the names of immigrants, including many from the Netherlands, who arrived at Fremantle. At the Western Australian Maritime Museum the King and Queen will unveil a pewter plate on loan from the Rijksmuseum in Amsterdam. This plate was left behind 400 years ago by Dirk Hartog as a record of his visit to Australia. The museum also houses a scale model of the museum's new building, design by Dutch architect Rem Koolhaas. In the Shipwreck Galleries the King and Queen will view the original timbers of the VOC ship De Batavia and other relics of wrecked ships.

On Tuesday morning the King and Queen will hear about the future of energy generation, and at Curtin University the Square Kilometre Array (SKA) telescope project will be presented. At the Curtin Hub for Immersive Visualisation and eResearch (HIVE) they will be shown how data is converted into 3D images for use in scientific research. The day's programme will end at Ascot Racecourse in Perth, where the King and Queen will watch several horse races. On large screens they will also follow the Melbourne Cup, the nation's main horse race which is watched by many Australians.

In Canberra King Willem-Alexander and Queen Máxima will lay a wreath at the Australian War Memorial, after which they will meet Australian and Dutch veterans of the Second World War and the International Security Assistance Force (ISAF) mission in Afghanistan. A meeting will then take place with the Honourable Malcolm Turnbull MP, Prime Minister of Australia and Ms Lucy Turnbull AO. The party will visit the MH17 monument and the King and Queen will speak to Australian officials who provided assistance in the response to the MH17 crash. At Government House Governor-General Cosgrove will welcome the royal couple and host a state lunch. The final event in the programme in Canberra will be a meeting with Australians of Dutch decent at the National Archives.

The programme in Sydney will begin with a concert at the Opera House where the Dutch pianists and brothers Lucas and Arthur Jussen will play with the Sydney Symphony Orchestra. This concert will be hosted by the King and Queen to thank the Governor-General and his wife for their hospitality during the state visit. The next morning King Willem-Alexander and Queen Máxima will attend a meeting of the Netherlands Foreign Investment Agency on potential Australian investments in the Netherlands. This will be followed by a talk with His Excellency General The Honourable David Hurley AC DSC (Ret'd), Governor of New South Wales. At the University of Sydney, Australia's oldest university, the King and Queen will be given a tour of research projects on which Australian and Dutch students are working together. They will also speak with Australian students who have studied in the Netherlands and Dutch students who are currently studying in Australia. At the meeting that will follow, Mr Koenders will present the New Holland Scholarship Australia, which aims to further expand academic collaboration between the two countries. After visiting the university, King Willem-Alexander will attend the final session of a meeting between Dutch and Australian CEOs, while Queen Máxima attends the close of a meeting on smart cities.

The royal couple will then travel by ferry to Cockatoo Island where they will attend a meeting on innovations in the production and transportation of agricultural and horticultural produce, and King Willem-Alexander will give a speech. The King and Queen will meet with the participants in the Dutch trade mission and be present for the signing of several MoUs. They will also be shown round FoodBytes and learn more about new concepts in the food sector.

In Brisbane the King and Queen will meet with the Honourable Paul de Jersey AC, Governor of Queensland, at Government House. They will then visit Queensland University of Technology (QUT) to hear about the water management partnership between the Netherlands and Australia.
During a boat trip on the Brisbane River the King and Queen will be told about the measures taken to combat flooding. After this excursion King Willem-Alexander and Queen Máxima will visit the Queensland Art Gallery, where they will view an exhibition of modern Australian and Aboriginal and Torres Strait Islander art.