Her Majesty Queen Máxima is to visit Pakistan from Tuesday 9 to Thursday 11 February in her role as the United Nations Secretary-General’s Special Advocate for Inclusive Finance for Development. In May 2015 Pakistan launched its National Financial Inclusion Strategy (NFIS) to promote access to financial services such as bank and savings accounts, loans and insurance, thus improving people’s economic position.

In Islamabad on Tuesday 9 February, Queen Máxima will meet with Ashraf Mahmood Wathra, governor of the State Bank of Pakistan, and representatives of public and private banks to discuss their role in making financial services accessible. In the afternoon, the Queen and Dr Jim Yong Kim, President of the World Bank Group, will attend the Universal Financial Access workshop held by the State Bank of Pakistan. The World Bank Group is currently preparing a programme to support the implementation of the NFIS over the next five years. Pakistan has a well-organised financial system, but services are underused, particularly by women and small businesses, according to the United Nations. That same afternoon, Queen Máxima will attend a meeting of the NFIS Council, which coordinates the strategy’s implementation.

Queen Máxima will also meet President Mamnoon Hussain and Prime Minister Nawaz Sharif, as well as finance minister Ishaq Dar, whose ministry plays an important role in implementing the NFIS. There will also be round-table discussions with representatives of international organisations, financial organisations, telecom companies and microfinance institutions on their role in improving access to financial services.

During her visit, the Queen will also focus on projects aimed at improving uptake of financial services. The Benazir Income Support Programme (BISP), for instance, gives financial support to women through digital bank accounts, increasing their independence. The women manage their own account. Instead of a PIN, they also can use fingerprint identification to withdraw money, which reduces the risk of fraud. Easypaisa is a system of banking agents located in shops, where customers can deposit or withdraw cash, and even take out insurance. The Kashf Foundation offers small loans to women in order to promote entrepreneurship. They also provide financial training for women, to inform them about financial products such as savings accounts and insurance. 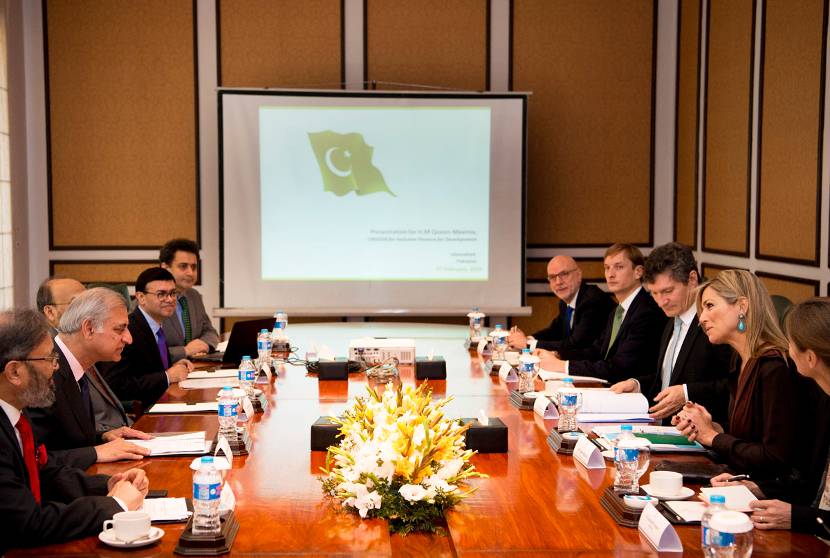 Queen Máxima will meet with Ashraf Mahmood Wathra, governor of the State Bank of Pakistan, and representatives of public and private banks.