Her Majesty Queen Máxima will be in Washington DC from the afternoon of Thursday 11 to Friday 12 April, attending the Spring Meetings of the International Monetary Fund and the World Bank Group in her capacity as the United Nations Secretary-General’s Special Advocate for Inclusive Finance for Development. 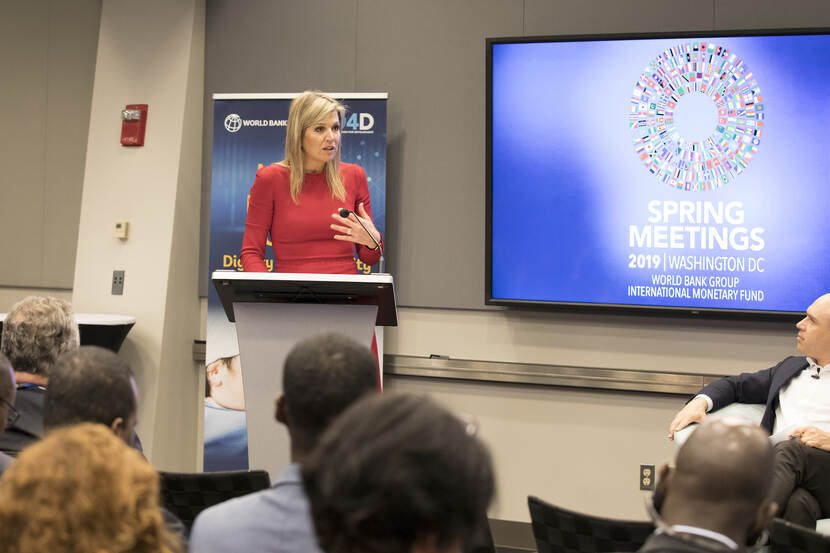 In the margins of the Spring Meetings Queen Máxima will meet with the members of the ‘Reference Group’, her regular consultative group made up of representatives of international organisations working to improve access to financial services, reduce poverty and promote economic development. The Reference Group has always been closely involved in preparing and following up on the UN country visits that Queen Máxima undertakes.

On the afternoon of Friday 12 April, Queen Máxima and the Interim President and CEO of the World Bank, Kristalina Georgieva, will attend the event, ‘Mission Billion: Transforming Countries and Empowering People Through Digital Identity’. According to the World Bank, around one billion people are unable to prove their identity, as they have no passport or other form of identification. Millions of others do have some form of ID but its validity cannot be verified. Without proof of identity it is virtually impossible to make use of formal financial services, such as a current or savings account, insurance, loans and pensions. This hinders people’s economic development and limits the opportunities for small businesses to sell their products online, for example. The session will focus on the use of technology to develop national digital identity systems. A major consideration is safeguarding data privacy.

Among the topics to be discussed at the Spring Meetings are the future prospects for the world economy and poverty reduction efforts. The attendees will include central bankers, finance and development ministers, academics and representatives of the private sector.

Queen Máxima was appointed the UN Secretary-General's Special Advocate for Inclusive Finance for Development in September 2009. In this capacity she advises on the importance of financial services and works all over the world to make these services available to everyone. This particularly helps foster the development of low-income groups and SMEs. Since June 2011 Queen Máxima has been honorary patron of the G20 Global Partnership for Financial Inclusion (GPFI).