King, Queen and Prime Minister to attend the 74th Session of the UN General Assembly

His Majesty King Willem-Alexander, Her Majesty Queen Máxima and Prime Minister Mark Rutte are to attend the 74th Session of the United Nations General Assembly (UNGA 74), to be held in New York from Tuesday 24 September to Friday 27 September 2019. The King will lead the delegation of the Kingdom of the Netherlands and will address the UN during the high-level General Debate on Tuesday 24 September. The King previously addressed the UN during the 70th Session of the General Assembly in 2015. King Willem-Alexander addresses the UN during the high-level General Debate of the 74th Session of the United Nations General Assembly.

In his address on Tuesday 24 September the King will raise subjects including the crucial importance of multilateral cooperation between the UN member states for peace, justice and development and the importance of joint action in the light of climate change.
Queen Máxima is also attending the UNGA in her capacity as the UN Secretary-General’s Special Advocate for Inclusive Finance for Development (UNSGSA). As the UNSGSA, Queen Máxima is committed to improving worldwide access to financial services, thus creating more opportunities for social and economic development. This year she celebrates her tenth year as the UNSGSA. On Wednesday 25 September, an event entitled ‘Financial Inclusion for Development: Building on 10 Years of Progress’ will be held to mark this special anniversary. The Secretary-General of the United Nations, António Guterres, will speak at the event. The members of the Kingdom delegation will have a busy programme, with numerous events, talks and bilateral meetings, including with the UN Secretary-General. A short overview of the main activities of each member of government is given below. 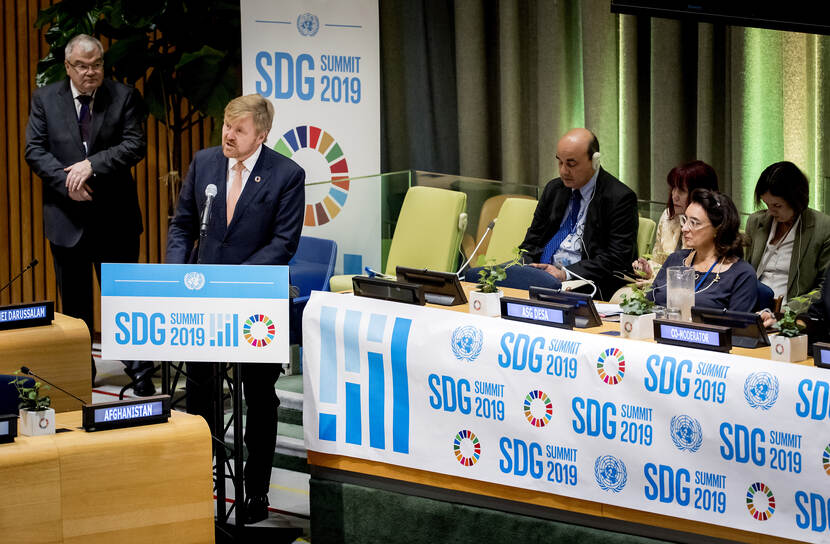 King Willem-Alexander speaks at a meeting on the Sustainable Development Goals (SDGs). These 17 goals were set by the UN member states in 2015 as part of the new global development agenda to put an end to extreme poverty, inequality, injustice and climate change.

Prime Minister Mark Rutte will be in New York on 23 and 24 September. On Monday 23 September, he will deliver an address at the Climate Action Summit to be held prior to the official opening of the UNGA as a follow-up to the Paris Agreement. In the evening, he will receive the Atlantic Council’s Global Citizen Award in recognition of his contribution to strengthening transatlantic relations. President Sebastián Piñera of Chile, television producer Brian Grazer and musician will.i.am will also receive awards.On Tuesday 24 September Mr Rutte and infrastructure minister Cora van Nieuwenhuizen will launch the Global Commission on Adaptation’s Year of Action. The aim is to accelerate climate adaptation worldwide in the run-up to the Climate Change Conference in Chile in December 2019, and the international Climate Adaptation Summit to be held in the Netherlands on 22 October 2020. Mr Rutte will take part in talks with the UN Secretary-General during the UNGA on 24 September. He will also have bilateral talks with various government leaders in the margins of the General Assembly. 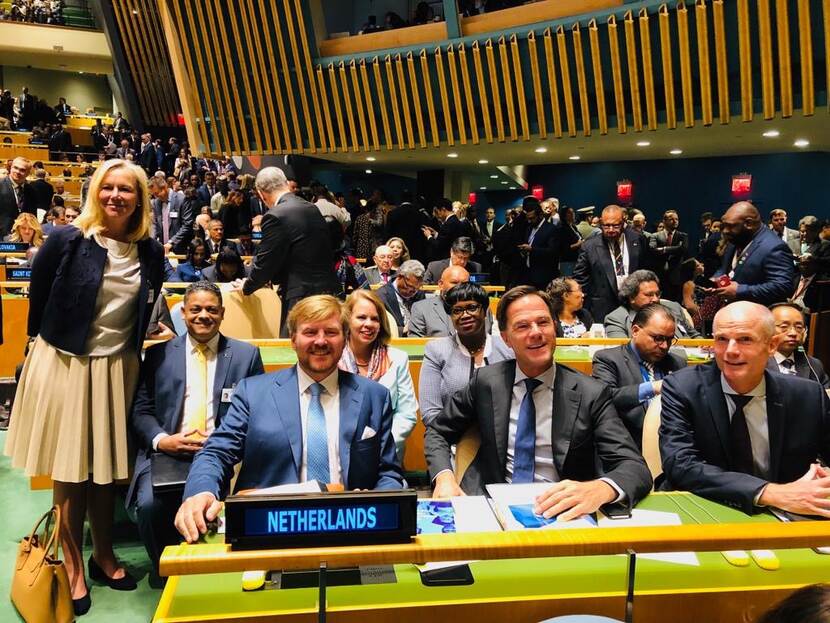 King Willem-Alexander leading the delegation of the Kingdom of the Netherlands during the 74th Session of the United Nations General Assembly.

Prime Ministers of the Caribbean part of the Kingdom

During their stay in New York, the Prime Ministers of Aruba, Curaçao and St Maarten will have talks with their colleagues on specific challenges for small island developing states (SIDS), for example their vulnerability to external forces and natural disasters. During the UNGA, the Caribbean countries within the Kingdom will work to gain worldwide recognition for transnational problems facing SIDS and to identify new forms of partnership.

Prime Minister Evelyn Wever-Croes of Aruba will host a meeting on implementation of SDG 16+ in SIDS. Her aim is to cooperate with other SIDS and UN organisations to fight corruption and strengthen transparent institutions. She will also discuss these issues in her intervention on progress, gaps and challenges during the high-level review of progress made on the SAMOA Pathway.

Prime Minister Eugene Rhuggenaath of Curaçao, together with his colleagues from Aruba and St Maarten, will promote the sustainable development of small island states during the high-level review of the SAMOA Pathway.

Prime Minister Leona Romeo-Marlin of St Maarten will address the meeting of the Clinton Global Initiative Action Network on strengthening the economies of the countries of the Caribbean region, promoting investment, and increasing their resilience to the impact of climate change.

Foreign affairs minister Stef Blok will be in New York from Monday 23 September to Friday 27 September. He will have talks with many of his counterparts on international affairs such as cybersecurity, human rights and justice. On 26 September, Mr Blok and his Iraqi counterpart, Mohamad A. Alhakim, will be holding a ministerial meeting to explore how ISIS can be held to account for its atrocities. Mr Blok will also co-chair the ministerial meeting of the Global Counter Terrorism Forum. This will be his last meeting as co-chair of the Forum. In 2020 Canada will take the Netherlands’ place. During his stay in New York, Mr Blok will work with Liechtenstein, Australia and the financial sector to call for measures to tackle slavery and human trafficking.

Foreign trade and development cooperation minister Sigrid Kaag will be in New York from Sunday 22 September to Thursday 26 September. She will attend the Climate Action Summit and will host a meeting of the NDC Partnership. This platform, which is chaired by the Netherlands and Costa Rica supports developing countries in achieving their national climate ambitions. The Netherlands’ aim is to encourage other countries to accelerate climate action and raise their climate goals. To give young people the opportunity to provide input for worldwide climate plans, a Dutch secondary school student will accompany the delegation to New York. 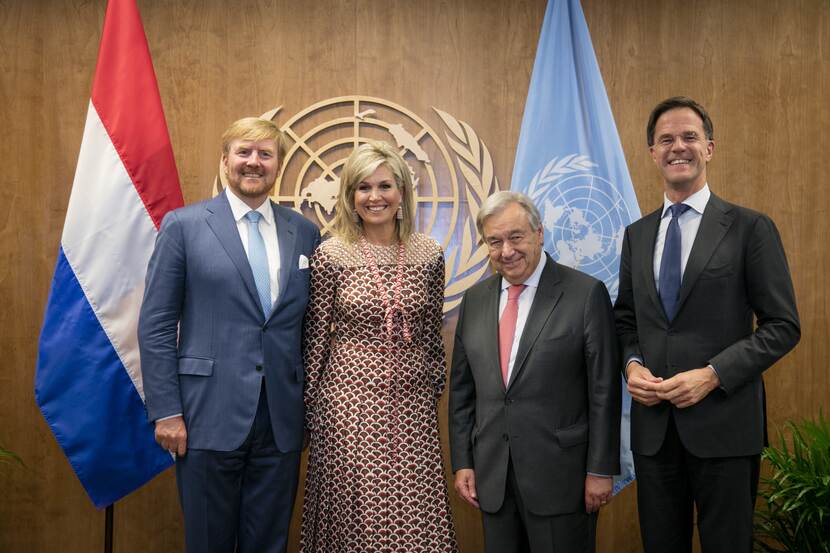 On the morning of Tuesday 24 September, infrastructure minister Cora van Nieuwenhuizen will deliver a speech at the event marking the start of the Global Commission on Adaptation’s Year of Action. This Commission was set up in 2018 on the initiative of the Netherlands. It is chaired by Ban Ki-moon, Kristalina Georgieva and Bill Gates. The report presented by the Commission on 10 September will be used to convince countries and regions to arm themselves against the impact of climate change. One day before the start of the UNGA, on Monday 23 September, Ms van Nieuwenhuizen will be in Miami, where she will join Mayor Francis X. Suarez for the opening of the Miami Global Centre on Adaptation. The Miami centre will operate as a regional office for the Global Centres in Rotterdam and Groningen.

Healthcare minister Bruno Bruins will attend the high-level meeting on Universal Health Coverage on Monday 23 September. He will call for attention to the high prices of medicines and seek partnerships with countries on negotiating prices with pharmaceutical companies. Mr Bruins will also be holding bilateral talks with his foreign counterparts on antibiotic resistance. Antibiotic resistance is increasing worldwide, posing a threat to health. The Netherlands has a pioneering role in international efforts to tackle this problem. In the margins of the UNGA, Mr Bruins will also visit Dutch doctors working in New York. 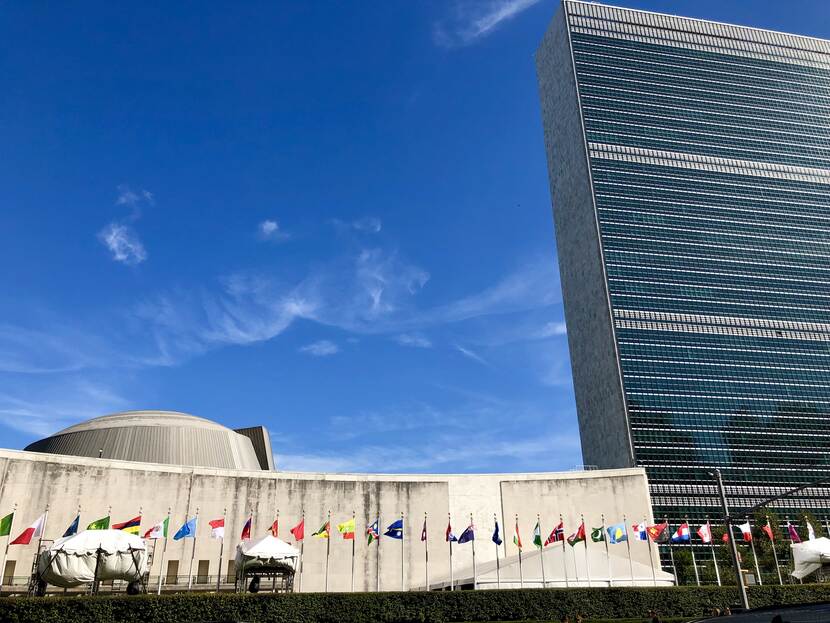 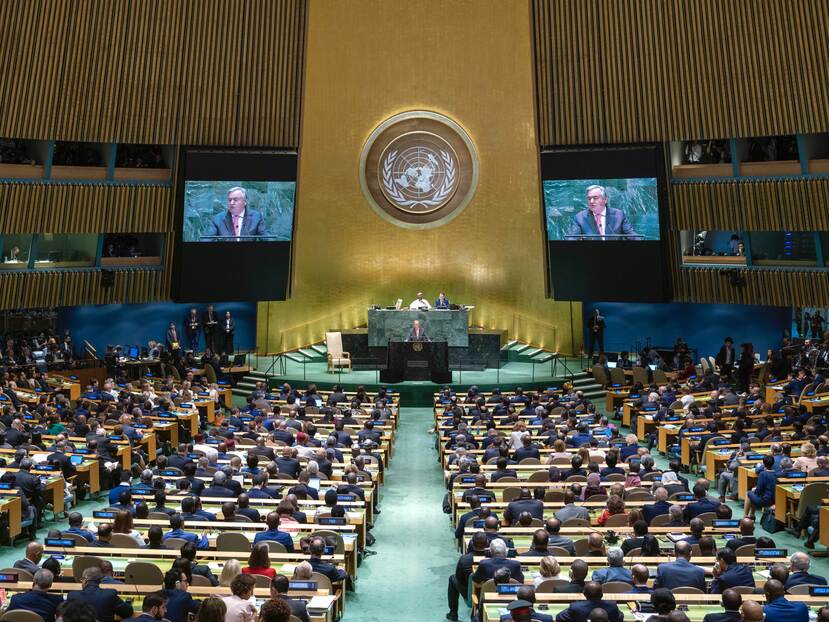 General Assembly of the United Nations.